The Mikvé Israel congregation dates back to 1651. Over the centuries, the congregation used six synagogues, with the current one consecrated in 1732.

The synagogue is open for worship Friday evenings and Saturday mornings. We are open Monday through Friday from 9:00 to 16:30 for visitors.

Tickets can be purchased for weekday visits at the entrance for US$ 10 or 18 Guilders and include entrance to the Jewish Cultural Historical Museum. Entrance is free for Curaçao residents with proof of ID.

The sanctuary is wheelchair accessible in the courtyard and on the ground-floor. Do bear in mind there is sand on the floor in the sanctuary, which can make it more difficult to traverse for persons who use wheelchairs, walkers, and canes. 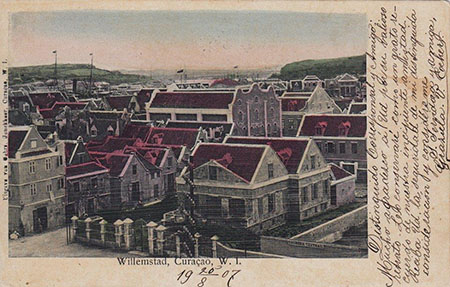 To attend Shabbat services on Friday evenings at 18:30 and Saturday mornings at 10:00 there is no charge. Services are also held on all Jewish holidays.

Our dress code is casual but neat dress for attendance at our synagogue services. For men, this includes slacks/khakis with a short sleeve dress shirt or polo shirt. For women, we suggest skirt or slacks, blouse that preferably covers up the shoulders. No faded or torn jeans, no shorts, no flip-flops for men or women. Please note there is no drinking or eating in the sanctuary.

Curaçao’s Jews moved to the walled city of Willemstad in the late 1600s and turned to trading and shipping instead of agriculture. As a result of their success and many more Jews settling on the island from Europe and the region, the community steadily grew. Larger houses of worship were necessary. In 1730 construction began on a much larger synagogue The interior of the new synagogue is a replica of the Portuguese synagogue of Amsterdam, the Esnoga. The local word for the synagogue is Snoa, likely derived from Esnoga
Read more...

In the middle of the 1800s there were varying petitions to the synagogue board by congregants to introduce reforms to the orthodox ritual. A rift emerged in 1863 between the orthodox and reform-minded members of the community. In 1864 the pro-reform members left Mikvé Israel and formed the Dutch Reform Emanu-El congregation. They built their own house of worship, the Temple Emanu-El, consecrated in 1867. The Mikvé Israel and Temple Emanu-El co-existed in close proximity to each other for a hundred years.

As both congregations suffered from dwindling attendance over time, the two re-connected in the early 1960s. After a hundred years apart, they merged in 1964 and became the United Netherlands Portuguese Congregation Mikvé Israel-Emanuel and adopted the Reconstructionist ritual, with services held at the original Mikvé Israel building. The Temple Emanu-El building was later sold and currently houses the Public Prosecutor’s office.

If you would like to see the entire video set to music, you can watch it here:

As the island’s Jewish population had grown quite large, a fundraising drive was organized to build a larger synagogue. In 1730, the 1703 building was demolished and construction started. Services were held temporarily at private homes of congregants. The synagogue board contracted an expert builder and carpenter from Amsterdam to carry out the work.

Although there have been several renovations over the centuries, including those of 1868 and 1974, the synagogue building is still virtually identical to the synagogue built in 1732. The preacher’s pulpit was added in 1858 to the rabbi’s platform, while the western and northern balconies and pillars were added in the late 1860s, including the pipe-organ.

Although the synagogue building’s exterior walls are made of limestone rock, coral stone, with sea sand and lime mortar, it shares similarities with the Portuguese Synagogue in Amsterdam. It was built at the north-east corner of the walled city of Willemstad and ‘behind the wall’ the area near the then four-meter-high city wall. The city walls and adjacent buildings were demolished in the mid 1860’s, (1861-1865) and mid 1890’s (1893-1894) respectively. The magnificent and ornate building was then able to be appreciated in full view. In 1982 the road it is on was renamed Hanchi Snoa (Synagogue alley) as a public honor to our congregation.

The floor is covered with sand, imported in the past from Israel, which harkens back to Dutch 18th century custom. The building’s first four corner stones and foundation stones of the four middle pillars were sold by the synagogue board to the highest bidding congregants. The four middle pillars that support the roof beams are now affixed with the names of the four Jewish matriarchs, Sarah, Rebecca, Rachel and Leah. The azure blue glass windows appear to date back to 1902. The furniture and cabinetry is mahogany, which can withstand the tropical climate.

On the ground-floor the benches in traditional Sephardic style face each-other across a rectangular space in the middle, with the Thebah, the platform close to the synagogue entrance at the front from where the rabbi preaches, and the Heychal, the ark containing the Torah scrolls at the eastern wall to the back of the sanctuary. To the left when standing at the entrance is the Banca, a raised area where the synagogue board sits.

There are three galleries above the sanctuary. North and south where the women used to sit when the congregation was orthodox, and a western gallery for the pipe-organ and choir. There are four gleaming brass chandeliers, each with 24 arms and candle holders, and there are eight brass candlesticks along the ark and rabbi’s platform.

Two of the brass chandeliers, the center section of the mahogany ark, a number of Torah scrolls, and two silver Torah crowns that were originally used in the 1703 synagogue are still used in the present sanctuary.

oldest in the region

In 1864, after many pro-reform congregants relinquished their synagogue membership to form their own Reform congregation the Temple Emanu-El, a synagogue committee was tasked with making the ritual more interesting. Among several recommendations were to create a choir and to install an organ.

In 1865 Dutch organ builders Pieter Flaes and Diederich Brünjes from Amsterdam were  contracted to build an organ. A year later it was completed and sent to the island, where it was assembled on the western gallery on the second floor, which was built especially to accommodate the pipe-organ. It was inaugurated on October 24, 1866.

The foot pedal of the organ pipes’ air bellows had to be manually pumped. In 1930 an electrical air pump was installed. The passage of time and the warm tropical climate took its toll on the organ.  Many attempts to maintain and even restore it failed. It was first replaced by a Hammond electric organ in 1947, followed by an Allen computerized digital electronic one in 1980.

The pipe-organ’s most recent renovation in 2002 was made possible by a donation from the Dutch Kingdom through its Ministry of Interior and Kingdom Affairs to the Mikvé Israel-Emanuel congregation in commemoration of its 350th anniversary in 2001.

In 2003 on May 4th, after many years of silence, the restored pipe-organ was once again able to be heard. It is heard, at times along with the choir, as part of the religious ritual during Shabbat and Jewish holidays. 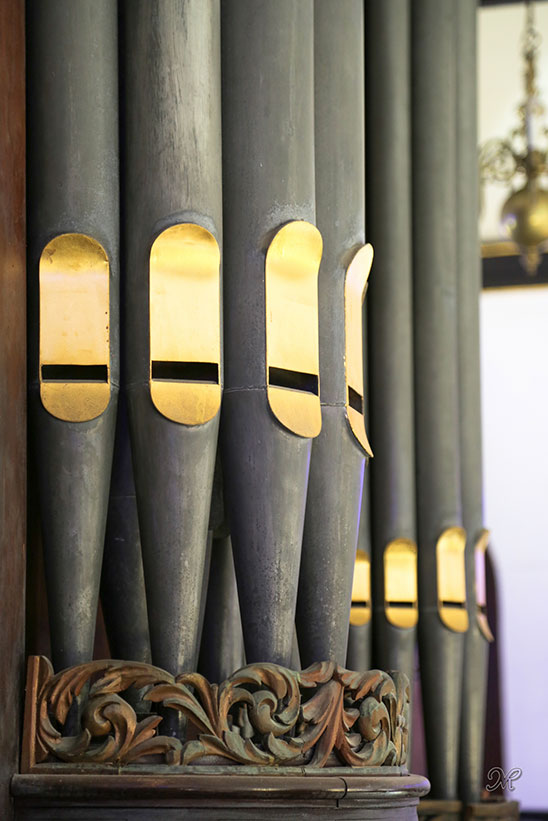 Make sure to visit the synagogue gift shop. There is a variety of specialty and locally hand-made items for purchase, including souvenirs, books, cards, and Judaica items. Cash and debit cards, Visa and Mastercard are accepted. Purchases can be shipped by request. Take home a keepsake of this historical congregation and synagogue. The gift shop stock can vary at times. 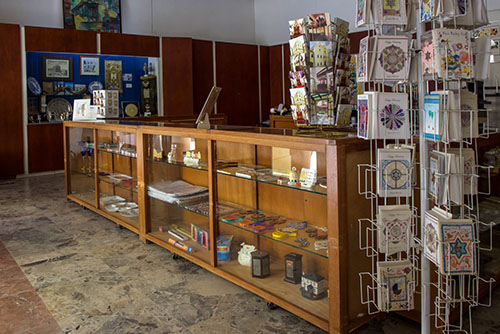